Asama Yuuto was looking down at the scars on the earth he had carved. The battle wasn’t his first time. Still, when he killed a person, he was inevitably sentimental.

It was half a year ago that Yuuto came to this world. When he was leaving school with his two childhood friends, the destination where he was invited by a black cat was, an old shrine.

There were no figures, and the black cats were lost.

Yuuto and his friends tried to go home, but suddenly they were drawn into the black whirlpool that suddenly appeared.

When Yuuto woke up, the shrine wasn’t there, instead, it was an old stone ruin.

Surrounded by anachronistic humans as they exited the entrance, it was Johanna, a female knight who claimed to be a knight who belonged in Order of Reharzen, who gave a tenacious and persistent explanation to Yuuto, who was extremely confused.

The four-hour conversation and the demonstration of 《Magic》 and 《Skill》 provided sufficient evidence to believe that it was a different world.

Under Johanna, who had taken such a troublesome role, Yuuto and his friends, who had been trained in knowledge and skills every day, had come to be called “The Three Heroes” in a different world, and each of them would be active inside and outside the country.

Among them, Yuuto manifested 《Magic》 and 《Skill》 specialized in battle. Originally, Yuto, who had high athletic ability to be selected as a representative in a sports tournament, was engaged in fighting as if to forget his previous world.

In the Craist Kingdom, which had a powerful demon territory nearby, demons were both a hateful opponent, but also a resource.

The defeated monsters would be processed and turned into daily necessities and armor. Yuuto still could vividly remember the day he ate the orcs he killed.

Still, Yuuto couldn’t get used to killing humans. The first time he pointed his sword at people was in the villages nearby the demon territory, where soldiers from the fallen Kanoa Kingdom became bandits, rampaging there.

Yuuto wasn’t a person with a sense of justice, but he possessed the morals and conscience of a modern human being. To tell the truth, he was reluctant to kill humans.

The subjugation team drove the bandits to the hideout, but the rush was expected to cost a lot. Yuuto’s hands were trembling, but he then clenched his fist, trying to hold his emotion, and went to the offensive.

The result was terrible. Yuuto fired in the skill 《Holy Slash》.

The hideout barrier was blown away with a single blow, and more than a dozen bandits died instantly. The rest were also subdued by the knights. Yuuto himself fought with the hiding bandit and stabbed his chest with a sword.

The sensation he felt on his hands remained for months, and he couldn’t even eat properly for several days. Yuuto, was after all only a high school student, so he was under an unbearable mental burden.

Even so, it was largely due to the existence of the knights and his childhood friends who were transported to this world together with him.

Yuuto finally returned from the sea of ​​thought to reality.

“… How many people died”

Yuuto’s 《Holy Slash》would have destroyed the building packed by the enemy company commander, killing forty or fifty people, including the Highserk soldiers who were about to leave.

Although his comrades and the liberated villagers thanked him, Yuuto’s heart hadn’t brightened up.

“Yuuto, what are you worried about”

It was Izaki Makoto, the same transferee, who called out to Yuuto.

“Sorry that it’s me.

Ayane is treating the injured.” 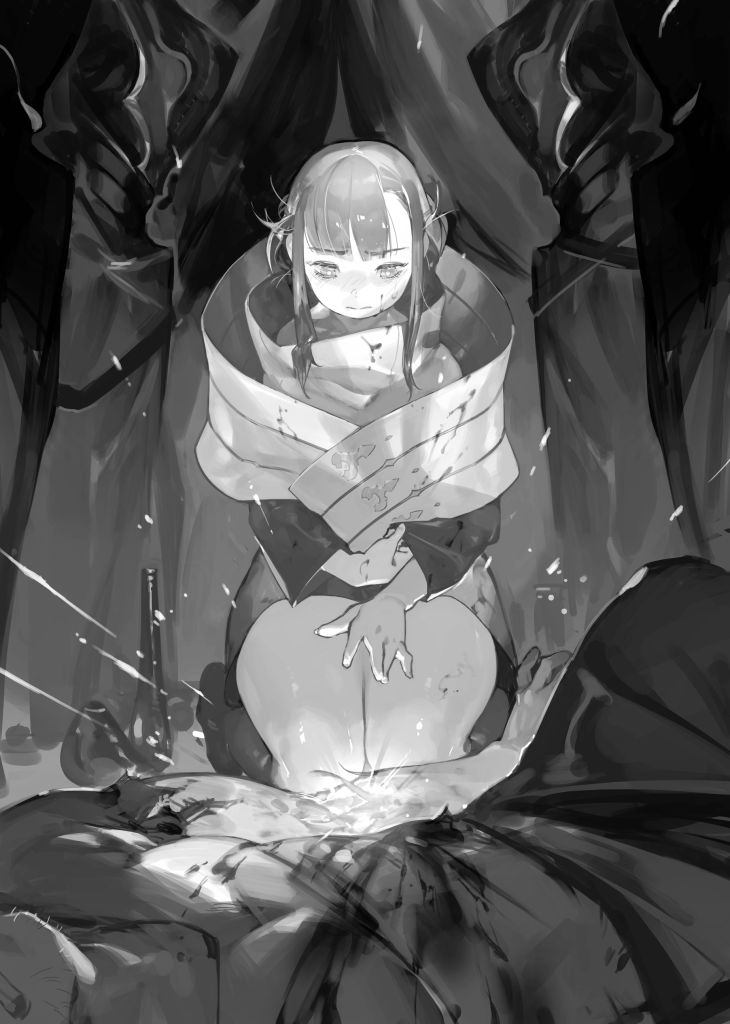 Makoto who laughed off hit Yuuto’s waist. Makoto also participated in the battle and killed enemy soldiers with range magic.

“You’ve worried about it more than enough.

I know it’s hard to change your mindset, but we have no choice but to live here.”

Yuuto and the others were blessed with both the environment and the guardian. In addition to being taken care of until they adapt, they lived a life that could be called the “upper class” in this world. In this world, they had seen many times that the powerless were brutally overrun.

If the invasive Highserk Empire was left unattended, the Craist Kingdom would eventually become a vassal state or at worst, be destroyed, like the Principality of Myard and the Kanoa Kingdom, so Yuuto decided for himself.

That he would protect the country, the place where he and his friends had been taken care of. There was no way for them to escape the battle anymore.

There are Johanna and us, so let’s do our best.”

I have dried orc meat and bean soup.

“Orc again, well, even though it looks like “that”, but the taste is quite addictive, right”

Let’s invite Ayane to eat together.”

Taken by Makoto, Yuuto disappeared into the tent. He came to this world and he lost immeasurable things, but he still gained something. Yuuto managed to switch his mind and focus his consciousness on the food.

TN : I’ll keep the Japanese person name, as (the surname comes before the given name), in the narration.

Also, here, the image of the character design of Izaki Makoto and Ayane

Scan the code to get the link and open it with the browser
Bookshelf synchronization, anytime, anywhere, mobile phone reading
Collection
Page
Source
Comment
Review
Feedback